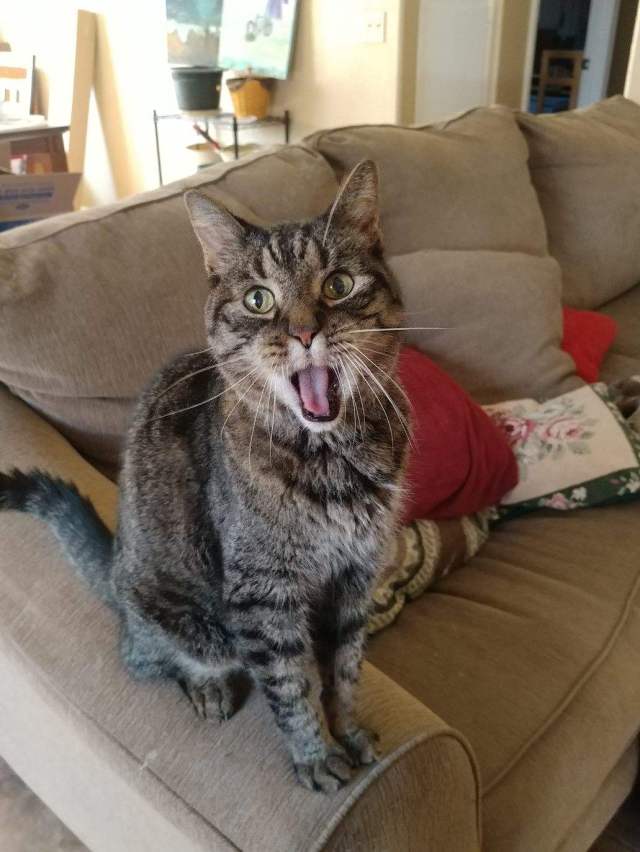 He left me this morning.

I knew it was coming, he’d been losing weight, he was frail and thin and wobbled slightly…but he was eating and pooping and peeing regularly, with only a couple of accidents from losing his balance in the tray and stepping in stuff that I know he was as horrified by as I was, when cleaning it up. But he took it in stride that I was washing his feet for a reason. He didn’t like it, but he tolerated it.

And he talked to me often, yeowling and mewling and staring with those big eyes, ordering me around – his big dumb cat with thumbs – so I would open a can of cat food, or share a morsel of my meal with him. And he would reward me by snuggling close, and letting me carry him around, like the baby I treated him as…

Life had not been kind to him before we adopted him from the shelter. Someone had had him declawed and then he wandered in the world – unable to defend himself or get away easily because of that. He also had a fang broken (we surmised that it was in defense, since cats who have been declawed often have to bite to defend themselves).

Yet, despite those “handicaps” he was unafraid. Bold and brassy, no matter how big a person or dog was (and we fostered an assortment of dogs while he was with us, plus adopted Logan our huge German Shepherd) – Mister would sashay up to each one and introduce himself, unphased by their size or barking and he was able to command instant respect in every case; while our other cat, Claudia retreated to a favorite hiding spot until the dog(s) slept, and crept out to eat Ninja Style…Mister simply let them know who was Alpha in our household and boldly strutted wherever he pleased, whenever he pleased. And the dogs always left him alone.

Mister and Logan became buddies and often hung together in whatever room. Curling up on the couch, or on top of me, wherever I was trying to sit to write. We referred to them as “the boys” and often the two of them would tease Claudia until she retreated to her hiding spot.

I will miss my “Handsomest Cat in the Universe” (as I often told him)… and the spot in my heart that he occupies will always ache. I’ve had many furbabies over the years, and each time I grieve one’s passing, I relive the grief of all those who came and went before.

I don’t know how much sadness the human heart can hold, I only know there seems to be room for more today.  Though I cannot imagine how, since I feel as though my chest will burst open any moment now.

Be well. Hug your loved ones, furry and human. Be thankful of your time with them.

Serroc’s Poetry Slam – Podcasts for the heart and soul